The Florida Fish and Wildlife Conservation Commission (FWC), the Florida Department of Environmental Protection (DEP) and our coral reef restoration partners announce the recent successful outplanting of 1,152 coral colonies along Florida’s Coral Reef as part of the largest coordinated experimental outplanting effort in Florida to date.

Reef restoration experiments in Florida have never been replicated on such a large scale before, with 24 outplanting sites spanning from Martin County down the coast of southeast Florida to Key West.

The purpose of this project is to determine the fate of corals that are susceptible to stony coral tissue loss disease when outplanted across Florida’s coral reef where the disease is still present but no longer found in epidemic proportions. The knowledge gained during this study will pave the way for future expansions in the restoration of disease-susceptible corals.

“This is an unprecedented effort during unprecedented times,” said FWC Commissioner Robert Spottswood. “It’s extraordinary the amount of coordination and partnerships that have formed to make this a reality. Proving that if we work together, we can accomplish just about anything.”

“This project is the first of its kind” said DEP Deputy Secretary for Ecosystem Restoration Adam Blalock. “Understanding where and when it is safe to start outplanting species that are susceptible to stony coral tissue loss disease again is a major first step in restoring the resilience of Florida’s coral reef.”

Contact information for these partners are listed at the bottom of this press release.

First reported in 2014 off the coast of Miami-Dade County, stony coral tissue loss disease has spread along Florida’s coral reef and to reefs in the Caribbean, including Jamaica, Mexico, the U.S. Virgin Islands and the Dominican Republic. Since 2015, FWC, DEP and numerous partners from federal, state and local agencies, non-governmental organizations, universities, and members of the community have been collaborating on a multifaceted response effort. While disease outbreaks are not uncommon, this event is unique due to its large geographic range, extended duration, rapid progression, high rates of mortality and the number of species affected. More than 20 of approximately 45 species of Florida’s reef-building corals have been affected. This includes five species listed as part of the federal Endangered Species Act. The cause of the disease is still unknown but could be caused by bacteria and it can be transmitted to other corals through direct contact and water circulation. Researchers are working to identify potential pathogens and relationships with environmental factors, strategies to treat diseased colonies, and identify genotypes of corals that are resistant to the disease. 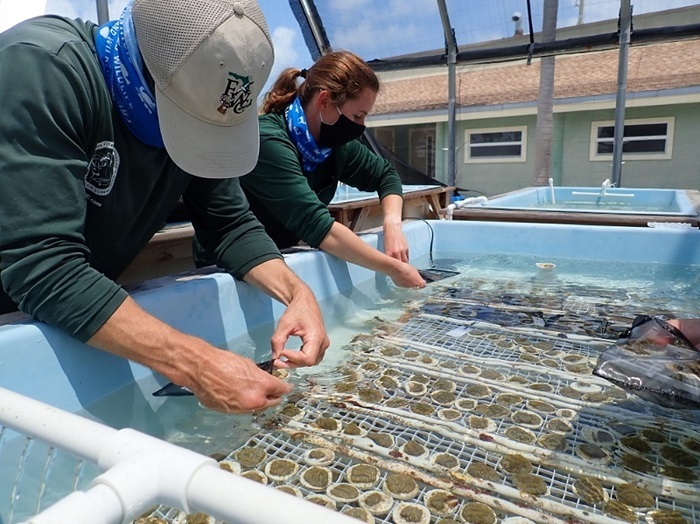 The project began when partners delivered 5,760 coral fragments needed to assemble the colonies to the Keys Marine Laboratory. 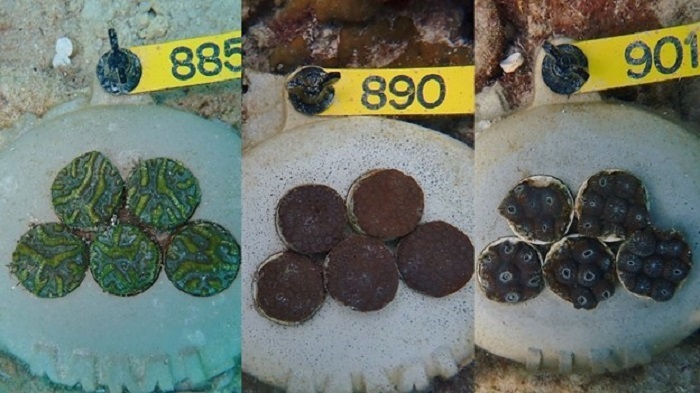 Three coral species, the knobby brain coral (left), the mountainous star coral (middle), and the great star coral (right), were selected for this study. These fragments were then packed into small bags, five fragments per bag, and distributed to regional partners. 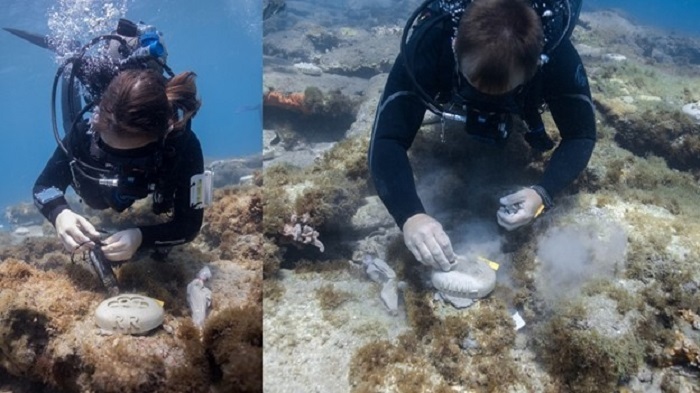 At each of the 24 sites, the partners attached concrete bases (left) and transplanted five fragments to each base (right) to create each coral colony. 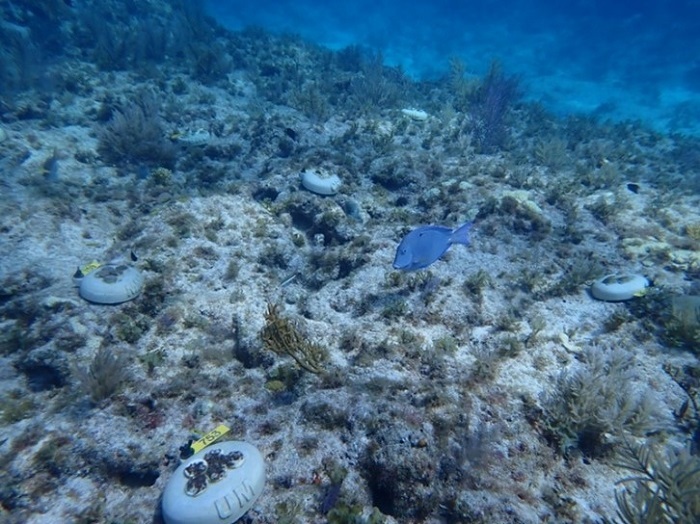 Forty-eight colonies were outplanted at each site (above) and will be photographed and monitored (below) for two years. 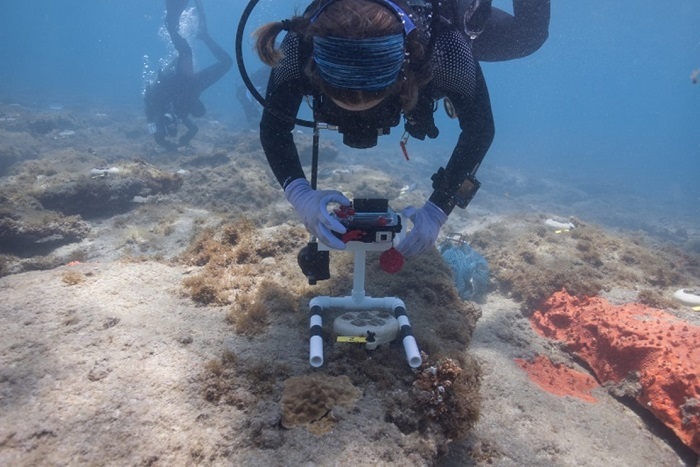 Monitoring has occurred so far at one week, two weeks and four weeks after outplanting and will continue monthly for two years. The photographs and observations are now being entered into a database. Information on the fate of these corals during this critical time will be available in early July.