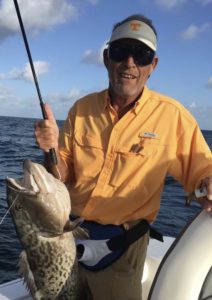 Dr. Samuel B. Miller of Chipley, Florida, passed peacefully on June 29, 2021, due to ongoing health issues.

He was born on September 8, 1951, in Hartford, Alabama, to Emmett and Clora Miller.

He is preceded in death by his parents and his son, Robert Steven Miller.

Sam attended school at Bethlehem and then joined the Air Force where he found his love for dentistry.  After leaving the Air Force, Sam set a goal of becoming not only a dentist but the best dentist and he did.  He graduated from the University of Tennessee dental school with a love for the color orange.  It is notable that he is probably the only person to enter and graduate dental school without having a bachelor’s degree.  In typical Sam fashion he found a way around that impediment in order to make his dream come true faster.

Surprisingly, he was not the best student but that did not stop him from becoming the best dentist that he could.  Upon completing dental school and getting licensed, he opened up shop in Chipley, Florida, working out of a little mobile home on Brickyard Road.  It did not take long for the word to travel that he was not only one heck of a character but that he was an amazing dentist that most importantly was gentle.  He knew just how to put his patients at rest and became dearly loved by them forging many wonderful friendships.  Sam’s brother Adron, whom he loved as a father, was a big part of his success as a dentist lending support through school and providing lab services. He later put his skills to use at the Department of Corrections and became the “dentist with the cigar” that all the inmates wanted to treat them.

Outside of dentistry, Sam loved to fish and enjoyed fishing with his friends Wilmer Jean “Mitch” Mitchell, Dr. Greg Sloan, and Nick Shelton.  As talented as he was as a dentist, he was not mechanically inclined and often enlisted the help of his friend Lloyd “Armie” Armstrong to help him with projects.  He also loved music and became famous for his time spent at Tootsie’s enjoying the live music with his cigar hanging out of his mouth.  He and his wife, Jackie enjoyed concerts, sitting at home listening and dancing to music, shopping, and going to the beach.  As his health deteriorated, he found a new hobby…riding in his RV.  He didn’t need a destination.  It was just about the trip itself.  Sam loved life and living and put his all into doing the things that he enjoyed.  He did this right up to the end.  Sam was passionate about life and enjoyed smiling and making others smile.  He had a way of charming most everyone.  The world will be a little less colorful and a lot quieter for those closest to him.  If you had the chance to meet him, you know he was one of a kind.  Papa Doc we will miss you!

A memorial is being held Saturday, July 3, ,2021, at Shiloh Baptist Church.  Visitation will begin at 2:00 pm and the service at 3:00 pm. Brown Funeral Home & Blue Lake Crematory of Chipley, FL is in charge of arrangements. Family and friends may sign the online register at www.brownfh.net.