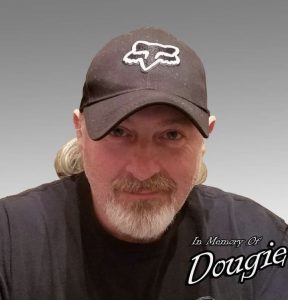 Dougie enjoyed many things. He enjoyed being outdoors, whether he was kayaking, riding his side by side, mowing grass, fishing, hunting, flying or gardening. He enjoyed spending time with his friends and his family, going to the movies and building things. He liked making things for people and he always had a project or two going on or had something he needed to tinker with.  Dougie always had a Yeti cup with him and I bet you can guess what was inside. Yep, sweet tea. He liked taking pictures of sunsets, sunrises, the moon, the stars, or pretty much any body of water. The secret to some of those great pictures, and another hobby was using his telescope. He liked to collect watches, character shirts, character socks, hats and shoes. Dougie also liked to collect toys, well big boy toys, like cars, trucks, side by side, a plane, and boats. You never knew which vehicle he was going to drive on any given day. He loved children. He would pick on them and then get in the floor to play with them. Truthfully, he picked on everybody. He had the biggest heart and was one of a kind. What made him the happiest though, was making other people happy or making them smile. Giving to other people made him who he was to the very core. When he made a friend, and he had a lot, it was usually for life. He will be missed by many people.