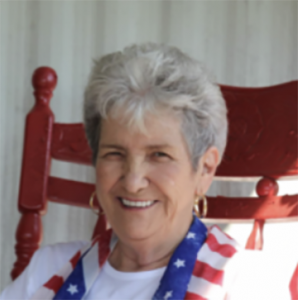 They say the greatest example of love is service to others. Laura Olene Brewer lived one of the greatest examples of service there could ever be. She served her country, her family, her friends, and her community for many, many years. She came into this world on December 31, 1949, to James “Slim” Boyett and Mincie Suggs Boyett of Vernon, Florida. She opened her eyes to humble beginnings, which would help to shape her beautiful spirit, and plant a burning passion within her to forever change the place where she was born and raised. Although her life would take her all over the world, we firmly believe that orange and blue ran through her veins. Of all the wonders of the many places life took her, none could compare or ever take the place of Vernon. Born a Yellow Jacket, she “flew” out into a great big world, but those wings would bring her back to her heart and her home.

She attended school in her hometown, and graduated from Vernon High School in 1967. She was a majorette in the VHS Band. After High School she moved to Gainesville, Florida where she worked for Southern Bell. A short time later she enlisted in the U.S. Army, and would go on to wherever Uncle Sam would send her. Her last assigned station was in Honolulu, Hawaii. After she completed her service with the Army, she moved back home, and began building the rest of her life with her beautiful daughter who was born on her military journey and her baby boy who was born upon her return to Vernon. She graduated from Chipola College in 1982 and attended Florida State University even though she was a die hard Florida Gator fan. She worked at the Ebro Dog Track where she met many great friends, then to West Point Pepperell, finally landing at the Florida Department of Transportation where she would be until retirement. She worked in just about every division during her almost thirty year career there. While working full time, and raising her children, she began her “full time” community service to the City of Vernon, surrounding cities, and all of the people contained within those borders. This is where she would be known to this day, as Ms. Olene. One of the key words in describing her life that you may have noticed is “work.” She was no stranger to putting in long hours, investing in the lives of people, and wasn’t afraid to put in the effort it took to get things done. From coaching cheerleading and softball, organizing and hosting beauty pageants that would bring in enough funds to pay for the yearly Fourth of July Fireworks for the town’s celebration for years, to being Recreation Director for the whole city, serving on City Council, as Mayor, and aunt/mom/grannie/sister and friend to any and every person who needed extra love in their life.

There’s not a place in this community that you can go where her name is not known and respected. She was honored recently during the Veteran’s Day recognition ceremony when the City of Vernon unanimously voted to dedicate the Community Center in her honor. She received various awards over the years for her exemplary work in her community from local organizations, even to the state level when she received a prestigious award from the governor. When she left this world on Thursday,  January 27, 2022 she left her forever mark on this town, on the hearts of its people, and a whole in the hearts of the family and friends she had to leave behind.

A celebration of her life will be held on Tuesday, February 1, 2022 at Liberty Church, 3983 Creek Rd. Vernon, FL at 3:00 p.m. with Pastors Dennis Boyett, Chris Smith, Josh and Cody Boyett and Mrs. Ozeal Harrell officiating. The family asks that you wear red, white, and blue to the service to honor her love of country. Visitation will be held on Monday night, January 31, 2022 at the Vernon Community Center, 2808 Yellow Jacket Dr. Vernon, FL from 6:00 p.m. to 8:00 p.m. Serving as pallbearers are: Shawn Boyett (Marines), Justin Gay (Army), Michael Galbreath (Army), Donovan Galbreath (Army), Waylon Skipper (Marines), and close family friend, Matt Hall. Two honorary pallbearers: Eddie Brewer (Army) and Gabriel Brewer (Army). The family is accepting flowers, but would love for donations to be made in her honor to the Vernon Recreation Department, or a veteran’s charity of your choice such as The Fisher House Foundation or Wounded Warriors. There will also be a memorial scholarship set up in her memory at Vernon High School in the future.  Obert Funeral Home in Chipley, FL are in charge of all arrangement