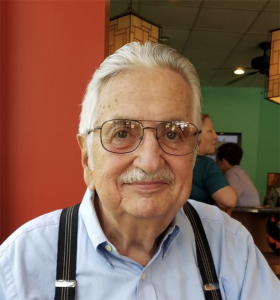 On Friday, August 12, 2022 Harold Railey met Jesus face to face and was reunited with the love of his life, Hazel, his wife of 56 years who has already been worshipping in Heaven since 2014.

Harold was born to Charlie & Esther Railey on Christmas day 1938, the last of 7 children. He was born & raised in Panama City back when beachfront property sold for .10cents an acre. You couldn’t grow crops in all that sand, so it was considered worthless. His Daddy was an Assembly of God preacher, and was Harold’s hero.

Harold asked Jesus to be his Savior at the age of 5, and while he was not perfect, he never wavered in his faith, never stopped pressing on toward the goal to win the prize for which God has called him heavenward in Christ Jesus. Phillipians 3:14

Their first child, Deidre was born 5 years later and their second child, Ric was born 18 months after that. Harold did many jobs to support his family. And he moved them around a lot. He seemed to have gypsy blood in him.

It was while working for Sunbeam Bread Co. that Harold fell in love with the restaurant business. For 5 years he supervised a chain of restaurants in Jacksonville, then took the leap and bought his own. Afterwards he would always say, be careful about praying for the desires of your heart! Sometimes God gives them to you!