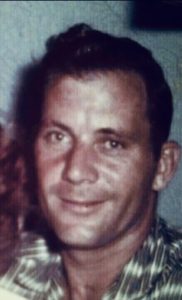 Willie Risher Cloud, age 91, passed away peacefully on May 10, 2021, surrounded by his loving family.

Risher, as he was known by family and friends, was born on August 16, 1929 in the Parramore community. He entered the United States Army in February of 1951 and served his country until February of 1956. He married Patricia Pollitt in 1954. Together they raised four children, Billy, Danny, Ricky, and Kathy. After being honorably discharged from the army, he worked as a steeple jack for many years before moving back to the Parramore community and settling on his family’s old home place. Risher loved working in his garden and sharing his harvest of beautiful vegetables with his friends and family. Risher had a great love of people and his community and loved nothing more than talking with others about days gone by.

He was preceded in death by his parents, Wilton and Arlene Cloud; brothers, Doc Cloud, Bob Cloud, and Lawrence Cloud; and sister, Betty Ann Cloud.

Visitation will be 10 to 11 AM Friday, May 14, 2021 at Oak Grove Church. A graveside service will follow in the church cemetery with Ed Ham officiating and James & Sikes Funeral Home Maddox Chapel directing.