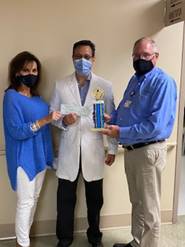 Dr. Deer was surprised to be named by the Employee Leadership Committee as the 2020 Employee of the Year.  Dr. Deer was recognized as Employee of the Month in January 2020 for offering to take a patient to the airport in Tallahassee to catch a flight to Tampa. The patient had been seen at Jackson Hospital after a car wreck on I10 and had no method of transportation to the airport to catch the flight.   The patient was so appreciative of Dr. Deer’s selfless act.  An Emergency Department staff member at Jackson Hospital commented, “I have never worked with such a compassionate physician.”  Jim Platt, Jackson Hospital’s CEO also remarked, “Dr. Deer is known around our hospital for his exemplary bedside manner and general compassion for the patients that visit Jackson Hospital.  This act of kindness, is just one of the many examples that speaks to the character of Dr. Chris Deer.”

Jackson Hospital’s customer service ideals are outlined in its program called “Give ‘em the Pickle.”  The Hospital’s customized program with video titled “What’s your Pickle?” with Bob Farrell, is produced by Media Partners™.   Patients, visitors, and colleagues submit nominations of staff from whom they received superior customer service.  Each month a “Pickle” luncheon is held to recognize the top nominees.  During the exclusive celebration with Administration, each participant is served a specially prepared meal by members of the Hospital’s Employee Leadership Council.

Jackson Hospital is proud to recognize Dr Chris Deer, and thanks him along with every employee, volunteer, and Medical Staff member for providing high-quality, leading-edge healthcare service.  Each day Jackson Hospital moves closer to reaching its vision of “being the best community healthcare system in the nation.”

Jackson Hospital is an award-winning facility and is proud of its most recent recognition, the FHA Award of Significance in Reducing Harm Across the Board.  Jackson Hospital is an iVantage Top 100 Rural & Community Hospital.  The hospital was named in The Joint Commission’s 2015 annual report “America’s Hospitals:  Improving Quality and Safety,” for attaining and sustaining excellence in accountability measure performance for Heart Failure, Pneumonia, Surgical Care, Immunization, and Perinatal Care.  The March of Dimes and American College of Obstetricians and Gynecologists recognize Jackson Hospital as the first hospital in Florida’s panhandle for achieving an early elective delivery rate less than 5%.  The hospital was designated by Blue Cross and Blue Shield Association as a Blue Distinctive Center+ for Maternity Care designation, a new designation under the Blue Distinction Specialty Care Program and awarded Baby Friendly distinction. Received the Florida Award by ACHA and the Florida Department of Health for Safely Reducing Primary C-sections