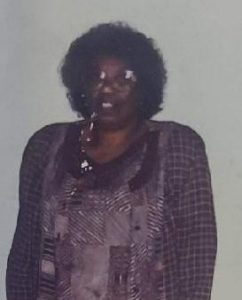 Missionary Janie Bell Bias, age 85, of Graceville, Florida completed her earthly journey on Saturday, June 26, 2021,  assured by 2 Corinthians 5:1, Amplified version, “…if the earthly tent (our physical body) which is our house is torn down (through death), we have a building from God, a house not made with hands, eternal in the heavens.”

In Union Springs, Alabama, on Thursday, May 21, 1936, Mr. and Mrs. Comer Lee and Ida Jane Dixon birthed a beautiful daughter. They named the child Janie (“God is gracious/good”). Little did they know—God’s plan and destiny for her life would be to proclaim His word to the world.

As she began her walk with Christ, she became a member of Third United Holiness Church (UHC), under the Founders Evangelists Aaron, Sr. and B. Snipes, in late 1973/early 1974, which started as a little house used as the Church Sanctuary until the new church was built and dedicated in 1982 in Graceville, Florida. During her journey of 48 years of service at UHC, she faithfully served under six pastors.

Missionary Bias served well in different ministries as being the President of the Southern District’s Usher Ministry for the United Holiness Churches in Georgia, Florida and Alabama (a ministry that she loved and served faithfully until her demise); as the Youth Director, she had such a love for young people. She was a Choir Director, participated in Transportation Ministry and would play the drums.

She used her home as a house for family, fellow saints and friends by providing a warm hospitality and a place to meet and fellowship. She was faithful in performing Missionary duties by going to homes and ministering wherever and whenever she was needed. Her dedication lasted down through the years until she was called home.

Missionary Bias was authentic, with wit, flair, and smart sense of humor. She was that genuine, one-of-a-kind friend that so many people held dear. She was an exceptional woman who practiced excellence. She clothed herself in humility. She chose what was right; she was consistent in serving others.

Missionary Bias was preceded in death by her parents; a brother, Mr. Willie J. Dixon and nephew, Mr. Tony Dixon and other family members.

Loving memories will be forever in the hearts of her caring and devoted family.