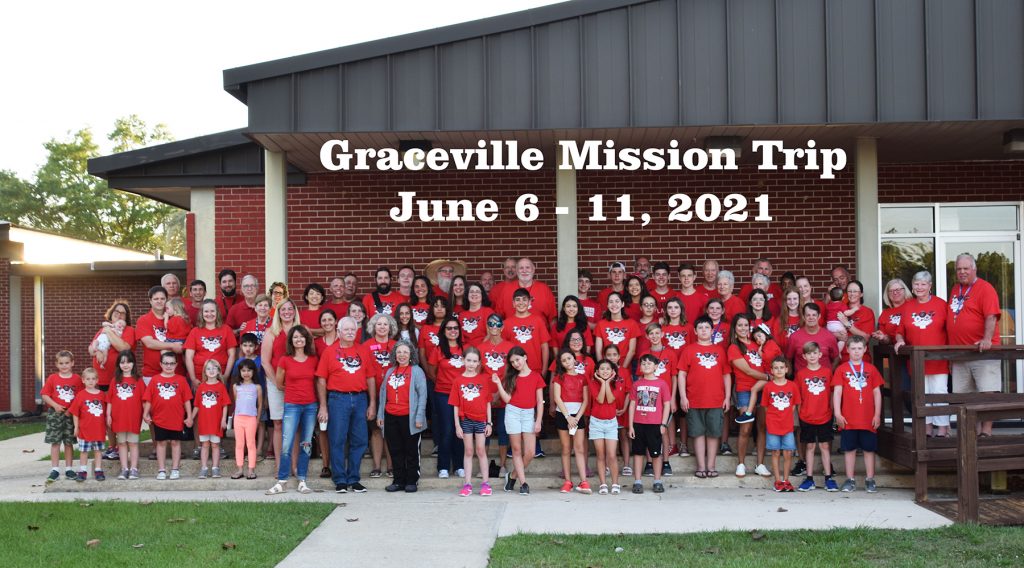 A big “thank you” to the First Baptist Church Orlando Mission Team! We are forever in your debt.

The faculty, students, and staff at The Baptist College of Florida (BCF) in Graceville were exceedingly grateful to the group of dedicated volunteers who came from First Baptist Church (FBC) in Orlando and sacrificed their vacation time and resources to serve on the BCF Campus June 6-11, 2021.

The mission team from Orlando has made the trip to Graceville every summer for the past 19 years (with the exception of 2020 due to the pandemic). This year, they arrived with 88 servant missionaries with the youngest only 2 ½ months old to one seasoned member 80 years old.  Out of the 88 people, they had 30 new members that came to volunteer on the BCF campus for the first time. There were three families representing three generations. The team leaders, Jim and Pat Wortham, were accompanied by their daughter-in-law, daughter and son-in-law, and four of their grandchildren. David and Anita Crews were accompanied by their son and two of their grandchildren. Dennis Blink was accompanied by his daughter and three of his grandchildren. The sight of multiple generations within families serving the Lord together offered a special blessing to those fortunate enough to witness the team in action.

According to the Wortham’s, this year was a little different than previous years. As in the past, they provided lawn maintenance throughout the campus and pressure washed buildings, ramps, sidewalks, the cement parking stops, and all of the curbs. However, their major “construction” project was the exhaustive makeover of the Clark House located in Heritage Village. The Clark House, office of the Curator for the Florida Baptist Convention Archives and the John Sullivan Chair, is over 100 years old. The FBC Orlando Volunteers pressure washed and painted the entire house. Rotted windowsills were replaced; the railings were removed, repaired, painted, and reinstalled; the lattice below the porch was removed, repaired, painted, and reinstalled; the 15 pillars were removed, repaired, painted, and reinstalled; all of the shutters were removed, cleaned, painted and reinstalled, and railings on the stairs and the handicapped ramp was painted. It was a major undertaking since most of the wood had to be replaced and it took skilled hands to do it.  Also, in Heritage Village, all of the upper wood in Grand Bobbie’s Pavilion was painted giving it a much-needed polish. As expected, a special lift was necessary to reach many of the places to paint and to reach limbs in the trees that needed to be cut and removed. Fortunately, one of the FBC Orlando team members, Bill Keller, was experienced in using the lift and gave detailed training and safety instructions to several of the team members who can now work the lift when needed.

The Deese Center staff was a tremendous support during the mission trip providing three delicious meals each day for team members which offered a nice respite from the hard work performed during the day. A special thanks to Mrs. Dawn and her staff for a job well done as well as the younger FBC Orlando children that took it upon themselves to be servants during meal time by circulating in the cafeteria with a cart and picking up all of the trash from the tables and disposing of it.

The evenings were packed full of fun. Monday night there was a talent show emceed by Kyle Martin and many talented people participated. Tuesday evening was a special time with BCF President Thomas A. Kinchen and First Lady Ruth Ann where team members enjoyed Ruth Ann’s 16-layer chocolate cake which is the reason some members return to Graceville every year. Wednesday evening was a time of praise and worship led by Orlando’s Mission Pastor Patrick Barrett who provided words of great encouragement and championed team members to continue being servant minded. After the worship service, FBC Orlando Volunteers held their annual Graceville Summer Olympics in the Wellness Center with three teams competing against each other. One of the highlights each year is on Thursday evening when together the mission team view the slide show of everything that was accomplished during the week. According to the team leaders, it was an amazing week of hard work, fun, meeting/making new friends, and realizing how God can put a group together and get so much accomplished for His glory.

The mission volunteers from FBC Orlando have provided an incredible labor of love to the college year after year after year. They have been such a huge blessing to the faculty, staff, and students of BCF, prayerfully so BCF can in turn be a blessing and God’s witness to the nations. “BCF is in our prayers throughout the year,” stated Wortham. “And we look forward to doing bigger and better things in the years to come.”

The Orlando Mission Team encourages and challenges other Florida Baptist churches to minister to the next generation of Christian leaders by volunteering their time and skills on the BCF campus.  For more information about BCF, its programs and mission opportunities, please call 800-328-2660 ext. 460.