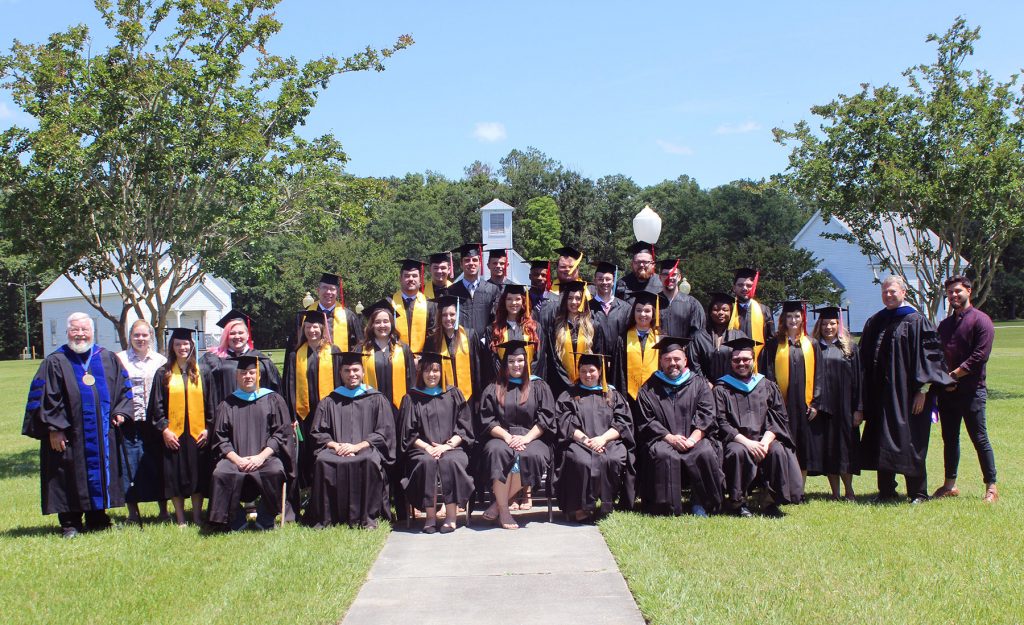 “Never, never, never settle for normal. If you do, don’t tell anyone you graduated from The Baptist College of Florida,” stated BCF President Thomas A. Kinchen during a motivating and moving commencement address to graduating seniors of the spring 2021 class. The graduation ceremony was held on May 21, outside at the Grand Bobby Pavilion located in historic Heritage Village on the beautiful campus of The Baptist College of Florida (BCF) in Graceville. The college was filled with excitement as family, friends, faculty, and staff arrived early, many traveling from great distances, to celebrate the momentous culmination of hard work, diligent study, and dedication the graduating seniors put into fulfilling the requirements for their degree. 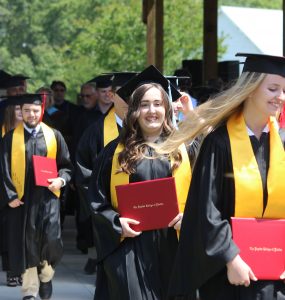 It was perfect weather outside as forty-three graduates walked across the stage to receive their diplomas. Families were socially distanced sitting five to a group and spaced apart, as graduates marched down the sidewalk as the Brass Ensemble conducted by BCF Professor Ronald Branning played “Pomp and Circumstance.” Following the traditional processional, the invocation was given by BCF Teacher Education Division Chair Kaye Johnson followed by the hymn “O Worship the King” led by Music and Worship Division Chair Bill Davis.

Kinchen welcomed guests and recognized family members who played such a major role in the lives and success of the assembled graduates. Then a special moment of recognition was afforded to BCF Professor Tanya Gardner as President Kinchen and General Education Division Chair Kristy Ford “hooded” Gardner who recently earned her doctorate but was unable to attend her own graduation and participate in the hooding tradition. The BCF College Singers presented the anthem “Expression of Gratitude” before Kinchen offered the powerful commencement address. “Even though things seem to be going back to some sort of normal, do not let this be the new normal when it comes to sharing the Gospel,” stated Kinchen. “Continue doing God’s work in your career fields, extraordinarily well, and don’t let anything stop you!”

After the confirmation by BCF Registrar Stephanie Orr and the BCF Faculty, Academic Dean Robin Jumper presented graduates to Kinchen for final approval. Once approval was granted, the senior’s names were called out one-by-one as they received their degree from Kinchen. Family and friends clapped and cheered as the new college graduates earned their degrees and could finally appreciate all of their hard work. The 2021 graduating class included eight students obtaining their master’s degree.

Graduates were then instructed to turn their tassels from right to left, symbolizing the final official act of graduation. After the thunderous applause for the graduates, the audience joined the faculty, staff, and new alumni in singing the BCF college hymn, “Tell Me the Story of Jesus.” Following the benediction by Director of Campus Safety and Plant Operations Olan Strickland, the Brass Ensemble played the recessional piece and then “Oh When the Saints…” as the graduates left with diplomas in hand, excited for the future. The entire ceremony was a celebration of the academic accomplishments of the new graduates as they embarked on “Changing the World Through the Unchanging Word®.”