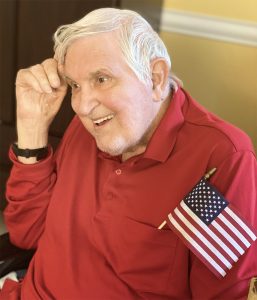 Arthur “Art” Karl Walter Dettbarn, 93, peacefully joined his Lord and Savior November 16, 2022.  A man of strong Christian faith, with a deep love and knowledge of the Bible, he looked forward to seeing loved ones in Heaven.  He was born on October 2, 1929 in Lockport, New York, near Niagara Falls, to Matilda Halfpap and Emil Karl Dettbarn, German immigrants.  A “mid-life bonus” baby, Art was much younger than his five siblings, and they nicknamed him “Sonny.”  He left home at 17 with $15 in his pocket and supported himself by being a greenskeeper at a golf course, earning a dollar per hour while living in a boarding house. At 18, Art joined the US Air Force.  After being trained as a jet mechanic he served a tour of duty in Japan repairing fighter jets. He was one of the “Be There Boys,” the special team who assisted fighter pilots as they left on a mission and when they returned. After Art finished his service stationed at Tyndall Air Force Base in Panama City, Florida, he became a trained electrical engineer and for years led a team at the U.S. Navy Mine Defense Labratory in Panama City, FL.  After retiring, Art was recruited by GE Aerospace for a third career as an Undersea Systems consultant traveling the country.

At the age of 21, Art married Nettie Sikes Dettbarn, five years his senior and a divorced mother of two young daughters.  He loved his family tremendously and was a devoted father, and husband to Nettie for 64 years until her passing in 2015.  They spent their later years in Chipley and Tallahassee, Florida.  He loved gardening; fishing; genealogy, studying and teaching the Bible; painting and continuing to study his longtime passion, Quantum Physics.  Even in his 90’s, Art, a highly curious man, would audit online university classes and was quick to share his extensive knowledge to anyone who would listen, mostly folks who had no interest or idea what he was talking about!  For the past five years Art has enjoyed living independently surrounded by friends at Mulligan Park Retirement Living.

A special thank-you to Drs. Katapodis, Tadros and Giove and the staff and residents of Mulligan Park Independent Living for their kindness over the years. The family also extends deep appreciation to the caring team at Big Bend Hospice. In lieu of flowers, please consider a memorial contribution to Big Bend Hospice.

A graveside service with military honors will be held Friday November 18, 11:00 am at Lakeview Methodist Church Cemetery in Caryville, FL.